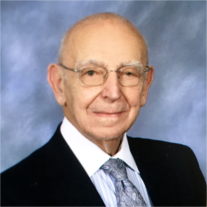 Tullio “Ted” Di Nunzio was born in Providence, Rhode Island on December 30, 1913 to Giuseppe and Concetta Di Nunzio. He was one of five children.

As a young man, Ted became a waiter and bartender at the Narragansett Hotel in Providence. At a local dance, Ted met the love of his life, Rafaella “Ella” Lancellotti, and married in 1939. He and Ella had one child, Robert, born in 1941.

About 1950, the family moved to Burbank, California where he delivered magazines to various stores. Shortly after that job, he began a long career as a meat cutter and was a member of the United Food and Commercial Workers Union. After retirement, Ted, found himself going to the Westfield Mall in Arcadia, where he would share a cup of coffee with friends and stop by Nordstrom to visit with employees and customers alike.

It wasn’t long after that the Nordstrom manager at the time created a position of “Greeter” for the store and promptly hired Ted. After all, he was a natural with his friendly smile and warm ways and he was only 85 years old. Ted worked for 15 years and retired just after his 100th birthday. He had the distinction of being the only greeter in the entire chain of Nordstrom stores. Ted enjoyed working for three managers including Becca Adkinson and Marcille Hughes. Becca even named her first born, Ella, after Ted’s wife.

He had a profound impact on so many who came in contact with him.

“The customers loved to interact with him and to say hello, and he always greeted them with a warm smile,” said store manager Marcille Hughes. “He loved working at the store; he felt like he was welcoming people into his home.”

One of Ted’s signatures was the way he dressed. He wore a dress shirt, tie, and slacks every day, even on his days off. His choice of shirts and ties was always on the cutting edge. Pinks, lavenders, purple…stripes and checks. He was not afraid of color and wore it well. He always dressed the part of a gentleman.

Nordstrom organized a huge birthday party in honor of Ted for his 100th birthday. Attended by customers, employees, and family, Ted relished every minute of the celebration. Even though Ted was a soft spoken man, he did not shy from all the celebrity-like attention he received from all the local media outlets. This celebration was followed by a special day at the Santa Anita race track where he had the fourth race named for him and stood in the winner’s circle.

Shortly after his retirement from Nordstrom at 100 years old, Ted moved to his own apartment at Brookdale, Irvine to be closer to his son, Bob. In short order Ted gained a reputation among those at Brookdale as a true gentlemen and, of course, continued to dress the part. He was tapped to be the greeter for Brookdale’s renaming celebration and Ted impressed as expected.

The motto he lived by was ‘It’s nice to be nice. Why not? Just smile and make somebody’s day.’

Ted was a devout Catholic and went to church every morning. He prayed the rosary daily and always left plenty of time for quiet meditation. He was a good and faithful servant to the very end.

In lieu of flowers, the family suggests making a donation in Ted’s honor to your favorite charity. Condolences can be sent to Bob Di Nunzio, P.O. Box 21B, Newport Beach, CA 92662.