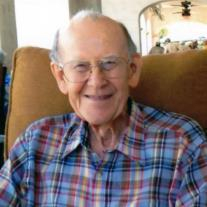 Tony James Ganje died November 8, 2015. He was born in Eagle Butte, South Dakota on June 25, 1927, the eleventh of fourteen children, and he is the last survivor.

He is survived by his wife Mary.

Tony served his country in the Korean War, achieving the rank of captain. He was awarded the bronze star for valor.

When he left the service he attended college in Brookings, South Dakota where he earned a Bachelor of Science degree in agricultural education and a Master of Science degree in soil chemistry. He then came to the University of California, Riverside where, during thirty-three years, he co-authored two scientific books, taught graduate students, wrote articles for scientific journals and did research.

Funeral Mass will be held at St. Edward Catholic Church, Dana Point, Tuesday, November 17 at 10:00am. Interment will be at Riverside National Cemetery, Riverside, California on Wednesday, November 18 at 10:45am.