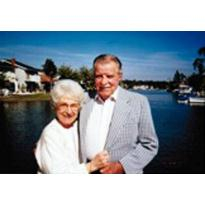 Tony Grubish Grubisich, 93, of Lake Forest, died December 2, 2010 at his home surrounded by his family. He was born in Albia, Iowa where he grew up on his family farm. At the early age of 18 he headed for the big city of Chicago. After serving in WWII, Tony returned to Chicago where he met and married his beautiful wife Anne. He and Anne moved with their children Janice and Jack to Orange County in 1957. He loved being away from the cold weather and easily settled into life in Southern California. Tony was Vice President and General Manager of Wonder Bowl Corp., owned ‘Tony’s’ restaurant and lounge at Wilshire and Westwood, and started one of the first rental car agencies in the area. After retirement Tony spent 27 rewarding years working side-by-side with his son, Jack, at McJack’s Corvettes. At 93, Tony was still proudly ‘on the job’! An avid fan of the WWE, Tony kept his family updated on all of the latest wrestling news. He had a great sense of humor and his timing was always, right on! Tony loved to tease, always with a twinkle in his eyes. He was preceded in death by his wife Anne and is survived by his daughter, Janice; son, Jack; sister, Mary Mortensen; grandchildren, Annette, Janniffer, Antony, Matthew and many close family and friends.

Funeral Mass is at 10:00 AM, Thursday, December 9, 2010 at Santiago de Compostela Catholic Church in Lake Forest. Interment will be held at Ascension Cemetery in Lake Forest.

In lieu of flowers, donations may be made to the American Heart Association, http://honor.americanheart.org/goto/Tony.Grubish