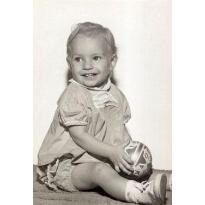 Tina Owens OKOROWSKI, born in Toledo, Ohio on July 30, 1957. Her optimistic attitude allowed her to fight her long battle with Uterine Sarcoma. She was an inspiration and a heroine to many. Through her courageous battle she taught many lessons to those she left behind. She felt truly blessed.

Tina was one of five children born to Harold and Kathryn Okorowski. After graduating from Whitmer High School, Tina chose to travel to Europe. Upon returning to the States, she married and began working at Lasalle’s Department Store as a Correspondence Secretary. She then went to work for Libbey Glass alongside her sister Marsha.

In 1978 she gave birth to her lovely daughter Sara Kae and in September of that same year the family moved to Costa Mesa, California. She worked for 10 years at Irvine Consulting Group as an Executive Secretary and Director of Public Relations. In 1985, God gave her a slice of heaven when she was lucky to have met and married Bill Owens. In 1987 the family bought a new home and moved to San Clemente, CA.

After Tina’s diagnosis of cancer in 2006, Bill and Tina started doing things a couple does in retirement. They traveled, read and visited many friends. As Tina would say, they lived, loved and laughed often. Anyone who knew her loved her and her spirit. We were all so lucky to be a part of her life.

There will be a memorial service for Tina at St. Edward’s Church, 33926 Calle la Primavera, Dana Point, CA, at 10am, November 17, 2008, with a reception following at the church. Charitable contributions can be made in the name of Tina Owens to the Sarcoma Alliance, 775 East Blithedale #334, Mill Valley, CA 94941. www.sarcomaalliance.com