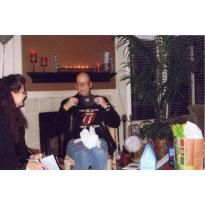 Timothy J. Deierling of Laguna Niguel, CA passed away on December 16, 2008, after a courageous 2-year battle with cancer. He was with some of the people who were most meaningful to him, and he was an inspiration to all of us in his fight to survive. Many of us who could not be with him had the opportunity in the last days of his life, to thank him for his great friendship. Tim was born in Hawarden, Iowa on January 26, 1955 to Fred and Dianne Deierling. He spent most of his early years in Carroll, Iowa and graduated from the University of Iowa in 1978. Tim’s hard work and dedication to JCPenney led to many significant assignments with the company culminating in appointment as District Manager for all JCPenney stores in the southern half of the Los Angeles area.

All of us who knew Tim well appreciated the timing, appropriateness, and dryness of his sense of humor. Tim was known for his love of the Beatles and their music, BMW’s, and good scotch. He was to the end a fierce fan of the Denver Bronco’s and loved to educate anyone that would listen about the dominance of Iowa Hawkeye wrestling.

Tim is survived by his wife Cathy Holt and her children Kimberlee and Greg; a brother Dave Linda of Ramsey, MN; a brother Bill Marlene of Buena Park, CA; one aunt, Irene Marstrelli of Stillwater, OH; two nieces, Amy Deierling of Minneapolis, MN and Rebecca Deierling of Mandan, ND; and so many great friends, neighbors, and business associates. He was taken from us far too early, but we all will hold his memory in our hearts for the rest of our lives.