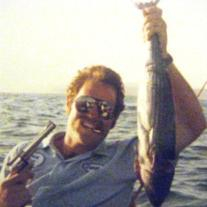 Thorpe “Sharky” Reeder, an inventor, fisherman, artist and fix anything man passed away unexpectedly, but peacefully in his sleep on Saturday, July 7, 2012. Sharky was a long time resident of Dana Point and you could always see him driving around town in his bright yellow El Camino with his “Surf Squirt” body boards attached. Sharky is survived by his daughter, Amber, his son by sibling, Adam Tuten, his niece Codee, family members Joann Reeder and Ann Cummins and his brothers, BH and Forrest Reeder. He was predeceased in life by his parents, Boyd and Charlotte Reeder, his sister, Fran and best friend Tommy. Sharky is also survived by family in Florida and Iowa and a multitude of friends he considered brothers and sisters. If you met Sharky, you were immediately family.

Thorpe was born in New York but as a baby his family moved to Miami, Florida which began a life-time love of fishing and his fascination with sharks. Growing up in Miami, Thorpe would spend lots of time fishing, which lent to some of his most memorable stories of Fish Camp in the Florida Keys. Most of his school days were spent not focusing on schoolwork, but more discussing fishing with his principals or painting beautiful murals for his teachers; he always knew how to focus on his stronger skills to help him through the more challenging ones. Sharky’s Fish Camp stories sound as far-fetched as they could get, but his friends and family will always vouch that they are 100% fact. From climbing up fire coral to escape an angry parrot fish with a personal vendetta, to having his life saved by his future high school principal when something went wrong while trying to pull in a shark from the beach with his 13-year old hands, Sharky’s stories are the things that made him a local legend wherever he called home.

After high school, Thorpe’s family moved to Dana Point and he easily transitioned into a full, but too short life of a multitude of friends, adventures on the seas and a legacy in his beautiful daughter, Amber. Amber was the light of his life and anyone who ever spoke to Thorpe knew he made sure they knew about his wonderful little girl. From the moment she was born, there was never anything more important to him. His life expanded one hundred fold when he held her in his arms for the first time. He made sure to tell Amber all about his adventures from his childhood and into early adulthood so that she knew just how amazing her father’s life truly was. Thorpe was what every dad should be to his child. He never missed a recital, concert, school play, science fair, field show, birthday, holiday, or any other occasion that he could show his support for his daughter. However, nothing made Amber happier as a kid than sitting and listening to her father’s stories and enjoying Jimmy Buffett music.

Working on the Aranistrans, a large luxury fishing boat where he spent a large amount of time, other skiffs, boats, ships, and yachts brought Thorpe so many memories and stories to share. He worked for the Dana Point Harbor Company and the Buoi Corporation for many years until he embraced his creative side and concentrated on his inventions and paintings. He spent the past fifteen years working on his invention, the Surf Squirt body board. He would sell his Surf Squirts and do fix-it jobs for friends and clients by day and then spend his evenings relaxing and painting at home. Thorpe was truly a jack-of-all-trades. If there was something that needed to be repaired, tweaked, looked at, built, or imagined Thorpe would do it and do it well.

Sharky will be deeply missed by his family, long-time friends and people who just crossed his path. Fish Camp in heaven has gained a head counselor beyond compare. We love you, Sharky!

IN LIEU OF FLOWERS, CONTRIBUTIONS FOR THE FAMILY OF THORPE ‘SHARKY’ REEDER CAN BE MADE AT WELLS FARGO BANK TO THE THORPE SHARKY REEDER BENEFIT MEMORIAL FUND – ACCOUNT # 2835116308