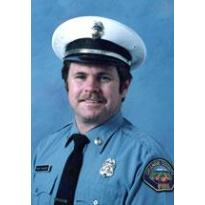 Thor Swanson died Saturday, June 24, 2006 in his Laguna Niguel home at the age of 51. He was a 27-year Veteran of the Orange County Fire Authority, for many years as a paramedic captain at station 29 in Dana Point, California.

Swanson’s career had brushes with fame including having his image appear on newspapers as far away as Nairobi, Kenya when an AP photographer shot him surveying a massive fire covering many blocks of Anaheim; being featured in an episode of William Shatner’s ?Rescue 911? after his crew’s successful efforts at saving a pilot after a crash at an El Toro air show, and a range of media coverage when he took part in delivering a baby in a Dana Point motel.

But it was thousands of private moments and a lifelong commitment to training and helping others that added up to a career honored by record-sized gatherings of firefighters when he retired last year after his cancer made continuing with the work he loved impossible.

His help for others wasn’t confined to his professional duties. For 32 years he volunteered for Garden Grove’s children’s summer camp. He did everything from maintenance and planning to dispensing medications to wearing odd costumes and singing funny songs around the campfire. He grew up in and loved Garden Grove and started working with the camp when he worked for the parks department there.

He is survived by his devoted wife of 21 years, Sandi Swanson; loving stepson and daughter-in-law Scott and Nicole Powley, of Laguna Niguel, CA; beloved sister, Laif Swanson, her children Anna and David; beloved mother, Deedie, all of Pasadena, CA and beloved brother, Gunnar, of Greenville, NC.

A Funeral Service to be held on Friiday, June 30th ~ 11:00 A.M. at South Shores Church in Dana Point, CA with Honor Guards.

In lieu of flowers, the family requests donations may be made to the Y.M.C.A. of Orange County – Thor Swanson Memorial Camp Fund at 13821 Newport Avenue, Suite 200, Tustin, CA 92780.