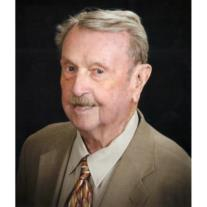 Tom, 91, of Mission Viejo, beloved husband of Patricia, passed away August 10, 2015 after a short illness. Tom was born in New York, NY, son of Thomas and Eleanor Drennen. He graduated from Rensselaer Polytechnic Institute in 1945 and served in the U.S. Navy as a Lieutenant during WW II. He was a proud plankowner of the USS Midway (CV-41). Tom moved to Mission Viejo in 1974.

Tom had a career in the pipe industry, serving as a salesman for over 40 years. He had sales territories in the New York area, New England, and spent 10 years in the Philadelphia PA area. Tom moved to Mission Viejo in 1974 where he was Sales Manager for the Southwest US. He was very active in St. Kilian Church as a Lector and an Extraordinary Minister of Communion. Tom was also very active in the Knights of Columbus and was a Past Grand Knight twice and a Past Faithful Navigator of the 4th Degree. He also was involved in Kairos Prison Retreats, Christians in Commerce and the parish Bible Study. In earlier years he was an avid golfer, remained a great reader and was a loyal Angels fan.