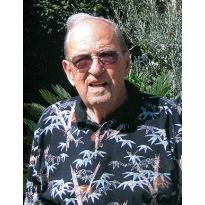 TJ Meadows, a lifelong Capistrano resident whose impact is still felt today in areas as diverse as the water department and Little League, passed away on July 16.

Around 1942, Meadows enlisted in the U.S. Naval Air Force, where he was a navigator who served in the Philippines, said his grandson, Thomas Walker. It was the Navy that likely forced him to take the name ‘Thomas James,’ because he’d been born simply as ‘TJ,’ but nobody, particular governmental agencies, believed the initials didn’t stand for something, so he took on ‘Thomas James.’

‘He legally changed his name, but nobody ever called him Thomas or James or Thomas James except my grandmother when she was mad at him,’ Walker said.

When he returned, he ran for the water department’a county operation at that time known simply as ‘Orange County Water Works No. 4.’

‘He did everything,’ Walker said. ‘If there was a water leak, sewer leak, or something at the reservoirs, that was his responsibly,Many times, he’d be out supervising or actually getting muddy at 2 a.m. when something broke , the buck stopped for him. He never expected someone to do a job he wouldn’t do himself or couldn’t do himself.’

He also served as a captain in the volunteer fire department, Walker said.

Meadows also served on the elementary-school board with Harold Ambuehl, Marco Forster and Fred Newhart and was active at Community Presbyterian Church. It was there that the pastor, Chuck Griffin, created a youth activities committee, where he, Betty Forster and Meadows came up with the idea for a local Little League.

‘TJ ran with the idea, so he became the father of the Little League,’ Pat Forster said. ‘We started playing in 1953.’

At one time, Meadows and his wife also ran a small market on Camino Capistrano, about where the driveway into the Mission offices is now. ‘It was a bread-and-milk market, everything you’d find in a 7-Eleven now, but that was the late 40s or early 50s…the Mission would have been their landlord.’

Meadows retired from the water department years and lived in what was once water-district headquarters on Andres Pico on the hill above the Mission. He spent his final years in his little Yellow House across from San Juan Elementary School.