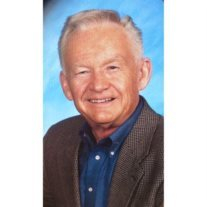 Thomas E. Judge, 79, Laguna Hills, CA, passed away on April 5, 2014, surrounded by his loving family after a hard-fought battle with cancer.

Tom lived a full life, centered on family, hard work and helping those who are less fortunate. He was born to Edward and Marie Judge, and raised in Ames, Iowa. Tom was the second-born with seven siblings: John, Sam, Mary, Howard, Charlotte, Theresa and Nancy-a caring family which remained close through the years.

Tom graduated from Iowa State University with a degree in Industrial Economics and was a lifelong ISU football fan. He also served as a commissioned officer in the artillery branch of the Army.

Tom was first of all a loving and proud husband to his wife of 36 years, Mary Lou. He was also a devoted father to his five children, Steven, John, David, Katherine and Michael; grandfather to Kristin, Lindsay, Aidan, Audrey, Mikey and Max; and great-grandfather to Jack, Tanner, Tatum and Eva. He cared deeply for each of them and their spouses, as he did for many nieces and nephews on both sides of his extended family. Sadly, Tom was preceded in death by two sons, Steve & John.

Tom learned early in life a strong sense of social justice from his family and the nuns who taught him in grade school. From their teaching and example his favorite prayer became “A Prayer to St. Francis,” praying to become an instrument of the Lord’s peace..

Where there is despair, let me sow hope…
Where there is sadness, joy.
Not so much to be consoled as to console,
To be loved as to love..

To this end, Tom was dedicated to helping the disadvantaged and needy, including family, friends, employees, strangers and charitable organizations. He volunteered to work for various social justice causes including feeding the poor and otherwise disadvantaged. Tom served as president of the Mental Health Association and of “Endeavors,” which assists ex-offenders to transition from prison back to society.

While Tom was a compassionate person, he was also an effective and determined business leader throughout a wide range of jobs in all geographic areas of the U.S. and in Northern Europe. These jobs included senior executive positions in three different Fortune 500 container manufacturing companies and in the Federal Reserve Bank of San Francisco. Tom was also an owner and CEO of a major billboard poster printing company for five years before retiring.

Tom was also fun-loving, a sports enthusiast, and he enjoyed being with people. In recent years he looked forward to regular trips with Mary Lou to the Midwest to visit family. Every week he had fun with his fellow volunteers at St. Kilian’s Catholic Church and his friends in the men’s golf league.

In his own words, Tom was very human and “fell short”sometimes as we all do. But Tom never gave up trying. His love and generosity changed the lives and outlooks of countless people, from all faiths and walks of life, across the country. His favorite quotation-spoken by John F. Kennedy, echoing the Gospel of Luke-was:

“From those to which much has been given, much is expected.”

All are invited to honor Tom’s life at the following services.

In lieu of flowers, please consider donating to the National Alliance on Mental Illness in Johnson County, IA. Tom’s family and friends will be participating in the NAMI-Walk on 4/26/14. You may donate to the Tom Judge Memorial team using this link:
http://namiwalks.nami.org/teamPage.aspx?Referrer=http%3a%2f%2fnamiwalks.org%2fcontent%2fhome&TeamID=501769