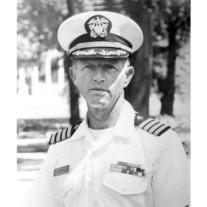 Tom’s family moved to Southern California from Sheridan, Indiana in 1920, where Tom was raised, graduating from Monrovia High School in 1937.

In 1941, Tom earned his B.A. degree from the University of California at Berkeley and promptly enlisted in the United States Naval Reserves to serve his country. All three of the Joyce brothers served in the Pacific during WWII. Tom suffered the loss of his beloved brother Jack, an Air Force pilot, when his plane was shot down in 1942.

After four years of active duty, Tom returned to California to attend USC Law School receiving his J.D. in 1949. He remained in the Naval Reserves until he retired, as Captain and became the Annapolis recruiting point for Southern California throughout his career.

Following graduation from law school, Tom joined the Central Intelligence Agency of the U.S. Government where he worked for the following seven years on various covert assignments abroad.

From 1959 to 1992, Tom worked in the Aerospace Industry as an attorney for Hughes Aircraft in Southern California. Tom met his wife, Delores, during his early years at Hughes and they enjoyed a full life together until her death in 1986.

With his devoted companion, Ethel Grace “EG” Thatcher, Tom spent 23 of his retirement years living a vibrant life. He was true father figure to EG’s son and daughter, and a grandfather to their children.

He was “Uncle Tom” to every Joyce descendant, a lifelong friend to veterans and former colleagues, and an inspiration to many others. He possessed the best of his generation. He was dignified, modest, and always gracious. He was self-disciplined and selfless, a terrific listener and an avid learner. Tom Joyce was a dynamic man. He will be deeply missed.

The life of Tom Joyce will be celebrated with Military Honors on Thursday, August 2 at 12:30 p.m., at Our Lady Queen of Angels Catholic Church in Newport Beach.