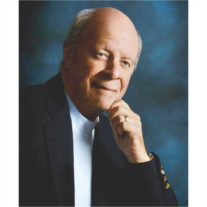 Tom was born May 20, 1933, to Doris and Carl Blum in Madison, Wisconsin. He graduated from the University of Wisconsin in Urban and Regional Planning. He moved to California in the early 70s where he had a distinguished and enjoyable 20-year career with the Santa Margarita Company as Executive Vice President helping to develop the city of Rancho Santa Margarita. Tom served proudly in the U.S. Army during the Korean War. He was President of the Board of Directors of the Santa Margarita Water District, served on the President’s Council on Physical Fitness and Sports Advisory Board, was Founder and Co-Chair of the Wisconsin Chapter of the Leukemia Society of America, and was a member of El Viaje de Portola. He also was a guest lecturer on urban and regional planning at Harvard University, University of Wisconsin, and University of Southern California. Tom enjoyed traveling the world with his wife Diane, spending time with family and friends, and watching all sports, especially cheering on his beloved Wisconsin Badgers and Green Bay Packers.

Tom’s greatest accomplishment was his family! He is survived by his wife Diane; his children, Tracy Blum, Carrie Rinderer (Rob), and Joe Blum (Paula); their mother Mary Blum; stepson Reed Morales (Melissa); sisters Lois Pollock (Dale) and Mary Jean Schwarz (Tom); 6 grandchildren, 7 great-grandchildren and numerous nieces and nephews. Preceding him in death are his parents, his two sons Jimmy and Chris, and his brother Joe (Aleesa). Tom built his life around his family and friends. His deep love, faith, strength and integrity will be greatly missed.

A ‘Celebration of Life’ is being planned for a later date. In lieu of flowers, please consider a donation to the St. Joseph Health-Mission Hospital Foundation www.mission4health.com/donate in memory of Thomas C. Blum.