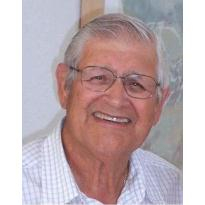 Thomas Arthur Rosko, 81, died Sunday, April 25, surrounded by his family after a courageous battle with cancer.

Thomas was born June 27, 1928 in Hillsboro, IL, the eldest of three sons. He graduated from the University of Illinois with a Bachelor’s Degree in Liberal Arts & Science in 1952 and a Master’s Degree in Labor & Industrial Relations in 1954. Thomas had a fulfilling career until retiring in 1993. He was a member of Saint Nicholas Parish, an avid golfer, and 22-year member at Mission Viejo Country Club.

Thomas is survived by his wife of 61 years, Lou Ann, and his three daughters, Marcia May, Elmhurst, IL, Lisa Montgomery, Trabuco Canyon, CA and Rebecca Wells, Mission Viejo, CA. He was preceded in death by his eldest daughter, Christine Redmond. Thomas is also survived by his seven grandchildren, Erin Redmond Grunas, Megan May, Ryan Redmond, Lauren May, Kelly May, Alexandra Montgomery, Cole Montgomery and two great-grandchildren Nicholas and Justin Grunas.

Visitation services and Rosary will be held at O’Connor Mortuary on Thursday, April 29 from 7 – 9 P.M. Funeral Mass will be held Friday, April 30 at 9 A.M. Saint Nicholas Catholic Church in Laguna Woods followed by interment at Ascension Cemetery, Lake Forest.

Contributions may be made to the American Cancer Society.