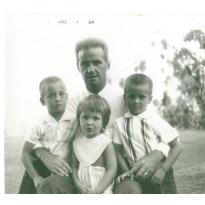 Dr. Thomas A. ‘Tony’ O’Sullivan was a beloved obstetrician who delivered over 6, 000 babies during his career, primarily at St. Joseph’s Hospital in Orange and at UC Irvine Medical Center.

Born in Crook in the north of England on March 25, 1926 to Michael J. O’Sullivan of Conemara, Ireland and Evelyn Hannigan of Muzik, Pennsylvania, he was the youngest of their three children. From the age of nine, he attended boarding school at St. Joseph’s College in Dumfries, Scotland where he excelled in academics and athletics. He graduated from medical school at King’s College, University of Durham, England in 1949. He completed his OB/GYN specialty training at hospitals in San Diego, San Francisco, New York, Chicago and Oshawa, Canada.

In 1954, he enlisted in the U.S. Army as a Captain and was stationed at the 16th Field Hospital in Nuremberg, Germany. There he met and married the love of his life, Carolyn Roberts, a beautiful nurse from Oklahoma City, Oklahoma. In 1956, they returned to civilian life and settled in southern California. They raised a family of six children in Cowan Heights, Santa Ana and then moved to Mission Viejo.

He had many interests outside of medicine. He sang in the choir at Santiago de Campostella parish for 18 years. He was proud of his Irish heritage and led the St. Patrick’s Day Parade in Santa Ana in the 1970s. An avid reader, he loved poetry and could recite entire passages from memory. He enjoyed painting, music and travel and never took for granted the natural beauty of California. A charismatic patriarch known affectionately as ‘Popa’ he regaled his 17 grandchildren with tales of his own youthful escapades. He cherished his family and friends and especially his wife of 53 years, Carolyn, with whom he had a wonderful life.