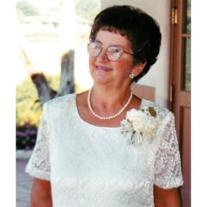 Therese Yvette Blais, age 82, died peacefully at the home she shared with her loving husband of 61 years, Leon Blais in Laguna Woods, CA, on December 15. Born March 10, 1930 in Manchester, NH, Therese was the sixth child of Rosa (Bourque) Pinard and Napoleon Pinard.

Upon graduating from St. Anthony’s High School, she worked at L’Avenir National newspaper where she met Leon, whom she married in 1951. They raised 10 children in Manchester before moving the family to Garden Grove CA in 1973. Upon retirement as the office administrator of St Columban’s Parish, she and Leon settled into an active retirement in Laguna Woods.

A life-long devout Catholic, Therese was active in her church, forming close friendships with other parishioners, Marriage Encounter participants and in a woman’s prayer group. Her travels in later years included such devotional sites as Medugorje, Fatima, Lourdes and the Holy Land.

Therese thrived in her years at Laguna Woods Village, taking advantage of exercise opportunities and handicrafts. She mastered crochet and completed several challenging multi-stitch “heirloom” blankets, as well as countless hand-made gifts for her children, grandchildren, other family and friends. She developed a hobby of creating handmade greeting cards and gift bags by using stamp pads, recycled materials, ribbons and patiently writing each card and address in beautiful calligraphy all her own. Hundreds of people have been the delighted recipient of thousands of creations, not only at Christmas and birthdays, but also at Easter, Thanksgiving, and many other occasions. She was thoughtful of people in hospitals and nursing homes, and would deliver cards to these strangers as well.

Her grandchildren hold fond memories of special times and gifts: ping pong games, beach outings, climbing their special cypress tree at Laguna Beach, hand crafted toys and Christmas tree ornaments with unique hand-sewn storage bags. Some of them benefitted from her drilling of the multiplication tables and other educational “fun” times. She encouraged her children’s and grandchildren’s musical pursuits and development of other talents, attending recitals and other performances both private and public. Best of all, we remember how she loved to laugh and to get us all laughing together until it seemed we would never stop.

Donations in memory of Therese Blais may be made to
Sisters Adorers of the Precious Blood
700 Bridge Street
Manchester, New Hampshire 03104-5495
Attn: Sister Mary Joseph