Theodore (Ted) Wilson, son of Doyle and Emma Wilson, was born the third child and baby brother of his two sisters, Deanna (Wilson) Anderko and Judy (Wilson) Ceja.  Having spent his childhood in Fountain Valley when the Angels came to Anaheim, he and his mom and dad became avid Angel fans. Every radio inside and outside the house” even the car radio was blasting with the games. Ted was especially proud of the fact that the starting 3rd baseman lived in our tract, around the corner from our house. Ted moved to Dana Point while in Junior High and lead a very active life in his parish at St. Edward’s, getting involved with the youth group, traveling to Mexico to build houses for the poor. He helped his dad after school with building the apartment buildings next door to the one they lived in (also built by his dad). Then after trying out architecture at Cal Poly San Luis Obispo, he decided to come back to Dana Point and work for Vons and was quickly made a store manager. During this time, Ted moved out and spent a lot of time with his friends traveling various places here in the US and also in Europe. He also loved river rafting, skiing, and playing football with his friends.

In his early thirties, Ted decided to become a real estate broker/contractor and work with his dad building homes. Sadly, however, a few days before his 34th birthday, and on his first day on the job in July 1992, Ted was broadsided and broke his neck. He became a quadriplegic and spent a year and a half in the hospital in rehab, where he learned to direct his own care. Living with his mom and dad for a while, Ted soon decided to move out on his own. He moved into his oldest sister’s apartment building and became active with the Knights of Columbus at St. Edwards. Having never married, these close friends became his family as they came to his aid on numerous occasions. His two sisters were pleased to see him surrounded by the support of so many good and faithful friends. 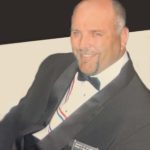