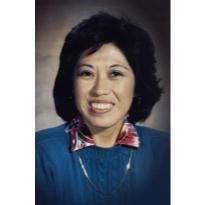 A beloved mother, daughter, sister, and teacher, died on Thursday, January 26, 2006. She was 60 years old. She died at Missiion Hospital in Mission Viejo, California 3 days after collaspsing at her home from the effects of a ruptured artery in her brain.

She was born May 24, 1945 in Miraflores, Peru, the second of six children to Soichi Manuel Nakamoto and Blanca Y. Nakamoto. Susana was an independent child, and she excelled as a student, showing a passion for learning that she would stay with her the rest of her life. One by one, all of the Nakamoto children and even their parents moved to the United States, crossing into a strange land and lifting themselves up to achieve success in their chosen fields. But Susana was the first to come. She went to Louisville, KY. on a scholarship to Spalding College, where she received a bachelor’s in sociology in 1968. While in school Susana met a young man named Ron Gonzalez, who was studying at the University of Louisville. The two met on a blind date in September 1967, danced the cha-cha and fell in love. They were married on June 11, 1969.

A year later they had a daughter, Cristine, and the family traveled around the world, including Japan and Hawaii, for Ron’s job as a helicopter pilot in the Marine Corps. In 1972 they moved to the El Toro Marine Corps Air Station in Orange County, and Susana began her masters studies in teaching and linguistics at Cal State University, Fullerton. She received her degree in 1979. By then the family had moved to Oahu, where Susana began teaching Spanish at Punahou High School and at the University of Hawaii.

In the fall of 1980, the Gonzalez family moved from Hawaii and settled in Orange County. Ron and Susana bought a house on Hazelnut Lane in Lake Forest, and in 1982 they had a second child, Zach. They put down roots in the community, and in addition to being a devoted wife and mother, Susana continued her teaching, holding positions at a number of Southern California high schools and community colleges, including Servite, Los Alamitos, and Sunny Hills high schools. For the last 15 years she taught Spanish and education courses at Golden West College in Huntington Beach.

Susana not only was a dedicated teacher, but she had a hunger for knowledge, and she eagerly embraced new ideas and challenges. On a late spring day in 2001, twelve days shy of her 56th birthday, she earned a Ph.D. in educational philosophy from Claremont Graduate University.

Her dissertation explored multiracial identity: How do we define ourselves when other people set boundaries of race and ethnicity? She asked hard questions about what makes us who we are, and how we can break through stereotypes. She often spoke of how diversity and learning to understand one another can enrich us as human beings. ?I am perplexed when I am asked to define my identity in terms of race,? she once wrote. ‘should I define it as three quarters Japanese and one quarter Peruvian, Spanish and Italian? Or should I define myself as a universal being whose existence is based on the air I breathe??

She found solace in teaching DahnHak, a mind-and-body training program designed to improve one’s health and help people reach personal fulfillment. She also became involved in the study of peace around the world. She started a peace studies program at Golden West College, and was working with other schools to establish similar programs.

Even with her burgeoning career, Susana’s family was dearest to her heart. She spoke with her mother and siblings regularly. She returned to Peru many times to catch up with old friends and family members. As a teenager she had cared for her ailing father, and in recent years during her trips to Peru she helped look after her Aunt Kio, who had suffered the effects of a debilitating stroke.

In 2006, Susana was looking forward to retirement in a couple of years, and she was eager to spend more time with her growing family. She and Ron had recently purchased a second home near Phoenix, Arizona. It was to be their dream house. They were expecting their first grandchild, as Cristine and her husband are due to have a daughter in April. Although she had misgivings about getting older, Susana was secretly delighted about becoming a grandmother. As if that weren’t enough change for one year, in December, Zach announced at a family dinner that he and his girlfriend Barbie were engaged to be married.

Susana was deeply loved by her family and friends, and she returned that love with warmth and wisdom and a generous, fun-loving spirit. Her sense of humor and sage advice will be missed by all of us. And though we are heartbroken at the cruel way in which she was taken from us, we treasure our memories of her, and we’re thankful for the time we shared with her.

To share your memories of Susana, as well as to view and add to a gallery of photos of her, please go to www.oconnormortuary.com, and click on her name.

For more information, please contact Margie Bunten at
mbunten@gwc.cccd.edu and at 714-895-8315.