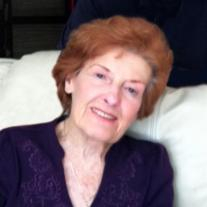 Mrs. Stoutland and her late husband, Arnold, moved to San Clemente in 1975. She was formerly an active volunteer in civic organizations.

For more than 20 years, she attended physical education classes at Saddleback College Emeritus Institute at Laguna Woods. She also was an avid golfer.

Her ocean view home in San Clemente was a great joy to her.

Born Aug. 11, 1924, in West Lafayette, Indiana, she was the daughter of Professor Irvin D. Mayer and Charlotte Mayer. She was a graduate of Purdue University and a member of Pi Beta Phi fraternity.

She survived by two daughters, Kathleen Barnes of Brevard, North Carolina and her husband, Joe Castro and Sandra Rowe and her husband, Lenny Rowe, of Boise, Idaho and a son, Ralph B. “Jeff” Barnes, Jr., of Santa Ana.

She married Arnold Stoutland in 1969. Mr. Stoutland died in 2007. A sister, Avis Anderson of West Lafayette, Indiana and a brother, James D. Mayer of Lake of the Ozarks, Arkansas died before her.

A memorial service will be at 1 p.m. Thursday, July 26 at O’Connor Mortuary, 25301 Alicia Parkway, Laguna Hills.

In lieu of flowers, the family asks that Mrs. Stoutland be remembered with donations to the Alzheimer’s Association of Los Angeles.