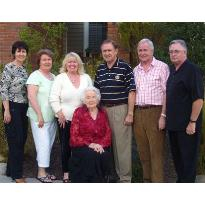 Susan Mary Teresa McGovern, of Dana Point, California passed away peacefully early on the morning of August 14th, 2010; she was just shy of ninety-two years of age.

Sue was born on Wesley Street in Cavan Town, County Cavan, Ireland on October 31st, 1918, to Patrick Duffy and Bridget Yourell, the second of seven children. She began hair dressing as a teen in her hometown of Cavan, eventually moving to Monaghan where she met Eugene McGovern. The two were married in Belfast on January 6, 1942 during war time. Their first three children, Philip, Eugene and Susan were born in Belfast. They later moved to Dublin where Ingrid, Brian and Rosaleen were born. Sue ran her own hair salon, ‘Sue Hair Stylist’, out of their home on Beaumont Avenue in Churchtown, Dublin. She was an unusual woman for her time in that she was an entrepreneur, running several businesses out of her home. Aside from being a hairstylist, Sue was a talented dressmaker, florist, and milliner hat maker. She was also an active member of her community and put together flower arrangements for services, weddings, and funerals at her local parish, the ‘Church of the Good Shepherd.’ At her best when she was serving others, she often visited and cared for the sick and dying, not only her relatives but also people in her community. She never turned anyone away from her door, often inviting people in need for meals and a place to stay.

After the death of her husband in 1985, Sue started a new adventure and moved to California in 1989. She lived with Rosie’s family until 2007 when her health was in decline and she required professional care. Before that time she enjoyed several return trips to Ireland, and was actively involved in the lives of her friends and family who were privileged to share in her life, both in Ireland and California.

She was dearly loved and will be greatly missed.