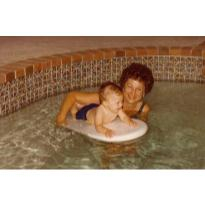 Born on June 26, 1932, in Kalamazoo, Mich., Sue lived in Kalamazoo until her family moved to Lompoc, Calif., when she was 13. After high school she attended San Jose State where she met Fred R. Peltz and they married Nov. 22, 1952, eventually settling in Phoenix, Ariz., in 1957 and later in Riverside, Calif., in 1962, to raise their family. In 1978, Sue began her long association working with the Society of the Divine Word Western Province, first at the Divine Word Retreat Center in Riverside and then with the Provincial’s office. She and Fred retired to San Clemente in 1993.

Sue was a loving and devoted wife, mother, grandmother and aunt who was active in the San Clemente Friends of the Library and Our Lady of Fatima Church in San Clemente and St. Edwards Church in Dana Point. She enjoyed playing bridge, hitting the slots and giving advice. Sue also treasured attending her high school reunions; she attended her 60th reunion last year.