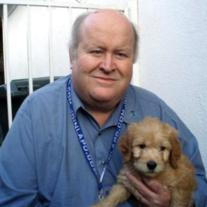 Stuart John Colville passed away peacefully at the age of 60 surrounded by his loved ones on March 27, 2012 in Newport Beach. He is survived by his wife Susan McNally, his son Mario Colville, his mother Barbara Colville O’Donnell, and his sister Maryanne Colville.

Stuart was born in Orange, CA, attended Webb High School and recently enjoyed a high school reunion with his dear friends. He graduated from Lafayette College in PA where he played football and was an outgoing fraternity brother of Delta Tau Delta. He graduated from the Santa Barbara College of Law and passed the Bar in 1980.

Stuart was happiest with one of his 4 cats on his lap, his Golden doodle Toby at his feet, and his loving wife by his side. With his wicked sense of humor, sharp wit and intelligence, and friendly ways, Stuart will be dearly missed by his loving family and many friends.

For more information on Stu’s life and to leave memories and comments, please visit www.legacy.com. In lieu of flowers, the family has requested that donations be made to the Rotary Foundation – please visit www.ni-rotary.org.