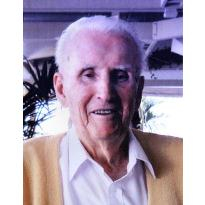 Stewart passed away on Monday, December. 27, 2010 at Villa Valencia nursing facility at the age of 90. Preceded in death by father Elmer, mother Audrey, and sisters Muriel and Mary Ellen. He is survived by his wife Mildred, sons William wife Joan of South Carolina, Thomas of Fountain Valley, grandson William Billy wife Denise, and great-grandson Evan of San Diego. Also many Nieces and Nephews.

Stewart was born August 28, 1920 in Portland Indiana to Elmer and Audrey Colestock. Stewart graduated from Cooley High School and Detroit Business College in Detroit, Michigan. After receiving his bachelor’s degree he worked for Chrysler Corporation for 33 years, retiring as Assistant Chief Engineer.

Married June 28, 1941 to Mildred Pether, at Emanuel Episcopal Church, Detroit, Michigan after a long courtship. At his death Stewart and Mildred were celebrating their 69 ½ years of a happy marriage.

In 1980 Stewart and Mildred moved to California where he pursued his passions of golf. When he was in his 80’s he got his first and only hole in one, church work, volunteer work, and even some work at engineering companies.

He made the world a better and more beautiful place for everyone who knew him and will remain in their hearts forever.

Interment will take place at a private service at El Toro Memorial Park Cemetery on Tuesday January 4th 2011 at 11:00am. Memorial Services will be held at Mount of Olives Lutheran Church, Mission Viejo, California, on Saturday, January 15th, 2011 at 11:00 am.

In lieu of flowers, contributions may be made to your favorite charity, or Mount of Olives Lutheran Church.