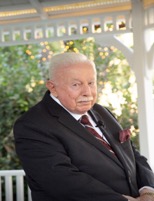 It is with deep sadness and a heavy heart we say goodbye to Steven Thomas Hoffman.  He was a beloved son, husband, step-father, brother, grandfather and a great-grandfather.

Steve was born in Walla Walla, WA on November 19, 1944. He was the oldest child of Dorothy (Konrath) and Henry Hoffman.  Steve attended several Catholic elementary schools in the Los Angeles area.  He attended St. Bernard High School and graduated from Bishop Montgomery High School.  While in high school Steve belonged to a band where he played base guitar.  The band was called the Frogmen and they one hit that made it to the top ten called “Underwater”.

He later attended and graduated from Whittier College in 1968. While in college Steve started his career at the Vons Grocery Company.  Steve served in the Army at Fort Knox, Kentucky in 1968, at Fort Belvoir, Virginia in 1969 and then at MacDill AFB, Florida in 1970. He was Honorably Discharged on April 1, 1974. He met and married Mary Ann Gutierrez on May 30, 1970 in Florida. They were divorced in May 1975 in Orange, California.  Once back in California Steve resumed his career with the Vons Grocery Company.  He started out stocking shelves on the graveyard shift but worked his way up the ladder to become store manager.  He managed several Vons stores in Orange County.  Once he left Vons he was one of the owners of StoneCreek Farmers Market in Irvine.  He finally left the grocery business behind and became a real estate investor.  He did this for forty- three years.

In 1977 he met his wife Carol.  After a long courtship they married on September 11, 1982 at St. Nicholas Catholic Church in El Toro, California. This year they have been married 38 years.

Steve passed away on August 7, 2020 in the Hospice unit of Mission Hospital.

In lieu of flowers we ask that your remembrances be sent to one of the charities he supported.   The American Cancer Society – St. Jude Children’s Hospital – The Shriner’s Hospital for Children – City of Hope.

The service will be outside under a Canopy. Bring a mask just in case they are required.

Immediately following you are invited to a “Celebration of Life” at the Dana Point Yacht Club, 24399 Dana Drive, Dana Point, CA 92629.  At the yacht club they will take your temperature and require a mask.

We are trying to get a Zoom meeting set up for those that are unable to attend.