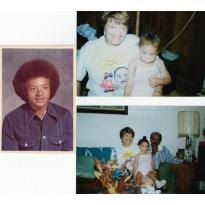 Steven Rene Smith was born March 12, 1957 in Ridgecrest, California to the union of Sandy F. Smith and Dora J. Stagg. He grew up in Ridgecrest and graduated from Burroughs High School in 1975. Steve attended junior college in Santa Barbara and San Diego where he ran track and played football. Steve later transferred to San Diego State and majored in business. A move to Palo Alto followed and Steve helped his father in the refrigeration business and then moved further North to Foster City, Ca. He worked as a Parks and Recreation supervisor for the ML King Center in the city of San Mateo. Steve loved this job because of his passion for working with children and young people. He taught classes, brought in guest speakers and coached football and baseball. Steve was always volunteering his time with children and he loved coaching.

Steve worked as a flight attendant for American Airlines and U.S. Air and pursued his love of travel. He was able to visit many exotic places during this time including Australia, Hawaii, Switzerland, Canada and the Caribbean.

In 1989, Steve settled in San Juan Capistrano where he fell in love with Orange County and later his wife Janet. They fell in love and married in October of 2001. Soon after, Steven and Janet welcomed Johnathan into their loving, Christian home. Steve’s coffee business continued to grow as did Johnathan. While continuing to work part time for American Airlines, Steve built his coffee business throughout Orange County. Steve’s philosophy was not only building business but building relationships with his clients as well. He also continued to volunteer and became a volunteer coach at Laguna Beach High School. He attended church on a regular basis, and in 2008 Steven and Janet were baptized together at Saddleback Church and became loyal members.

Steven was known for his fun loving, easy going personality. He was the life of any party or gathering. Steve enjoyed life to the fullest and loved, loved, loved his family and friends. He was generous and kind and always willing to help others. Steve mentored young people and was always willing to share his keys to success with others.

In lieu of flowers, memorial gifts to support the UCLA Brain Tumor Program, under the direction of Dr. Linda Liau, can be made to The UCLA Foundation, c/o Adrienne Walt, Senior Director of Development, 10945 Le Conte Avenue, Suite 3132, Box 951784, Los Angeles, CA 90095-1784. Please indicate in the memo/comment section that the gift is being made for use by Dr. Linda Liau in memory of Steven Rene Smith.

Gifts can also be made online at
http://neurosurgery.ucla.edu.