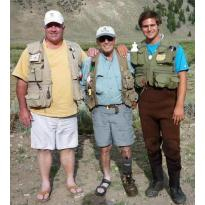 Steven was born October 25, 1960, in Pasadena, California, to Steven Sr. and Carol. He attended Richard Henry Dana Elementary School, Marco Forster Middle School and Dana Hills High School. He continued his education at University of California Santa Barbara, where he earned his BA in Economics and was granted a fellowship at University of Southern California, where he earned his MBA. Steven competed as an Academic Decathlon student in high school and later supported the Orange County Academic Decathlon as an advisor to the students and helped to run the competitions.

Steven is survived by his wife, Michelle; sons, Andrew and Michael; daughter, Hailey; stepchildren, Thomas and Sarah Trauger; and mother, Carol Rush. He was predeceased by his father, Steven Oel Spelman, Sr. He was the oldest of four and is survived by Janet, Laura and Mark.

He had an accomplished business career, joining Arthur Andersen as a CPA, followed by roles as Chief Financial Officer for Capital Pacific Holdings and President of Banning Lewis Ranch. He and Michelle purchased their own winery and produced award-winning Joliet Vineyards Zinfandel.

Steven was generous with his money and a strong supporter to his family. He was in the middle of putting four of five children through college, with his youngest starting next year. He was looking forward to grandchildren and was cherished by his young nieces, Brianna and Samantha. His older nieces, Ashlee and Kathrin, have fond memories of their uncle Steve and loved him dearly.

Services will be held at 2pm on September 3rd at Coto de Caza Golf & Racquet Club www.clubcorp.com/CotodeCaza and we welcome friends, family and colleagues. A small family ceremony will be held earlier that day to spread his ashes at sea.

In lieu of flowers, the family requests donations be made in Steven’s memory to the Orange County Academic Decathlon Association.