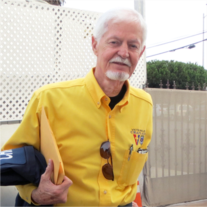 Reverend Steven Henry Weller went to be with The Lord, Friday September 1st at 6:08 am at his home in Venice, CA. He peacefully passed from this life into Eternity with his loving wife Regina, at his side.

Steven was born on April 29, 1943 to Harold and Marjorie Weller. After studying Business Administration in college, he served oversees in the United States Army, Tenth Special Forces Group, from 1961-1964, as a radio operator in the Green Beret. He received an honorable discharge. It was while stationed in Germany that he met and married his first wife and mother of his three daughters -Gabriele Oligher.

Upon his return to the states, Steven developed a burden for those struggling with substance abuse issues and spent over a decade facilitating recovery groups and ministering to men at treatment centers in the Los Angeles area. These locations include the Residential Treatment Center Veterans Administration, and The L.A. Vets Living Facility, to name a few.

In 1996, Steven married Regina Aguilera who would also become his partner in ministry and chaplaincy. In 2000, Steven received his Staff Ministerial License from the International Church of Foursquare and became Assistant Pastor at Venice Foursquare Church, Venice, CA. He proceeded to earn his District and Senior Pastor Ministerial Licenses, and was appointed Senior Pastor of Venice Foursquare Church in 2004. Steven received his Certificate of Ordination in September, 2005.

In 2006, he became an Ordained Senior Chaplain with The International Fellowship of Chaplains, Ohio and was appointed as Clergy Council Member LAPD, Pacific Division. He was then appointed Senior Police Chaplain, Police Division, Foursquare Chaplains, CA. He served as Clergy Council Member with LAPD until 2014 when he and his wife, Regina, founded the Homeless Task Force. Steven pursued and completed a number of vocational credentials and trainings including Disaster Relief, Crisis Intervention and PTSD training.

Steven remained Senior Pastor of Venice Foursquare Church and continued his Chaplain work with the Homeless Task Force throughout his battle with cancer.

He is survived by his wife Regina, his daughters, Angela Starr, Heidi Riggio, and Steffanie Larriba, and his grandchildren Samuel Starr, and Clara Riggio.

And this is eternal life, that they may know You, the only true God, and Jesus Christ whom You have sent. ~ John 17:3