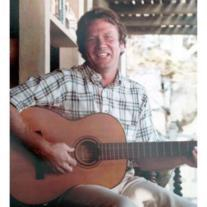 “Steve Freese, what a handsome guy.” A direct quote from the song he wrote and often sang about himself, and deeply felt by all that knew him. He had baby blue eyes and a magnetic smile, but was even more handsome of heart and spirit.

Steve’s battle with cancer came to and end on November 12th 2014 with his wife, three daughters and friends from near and far at his bedside. He made them laugh until the end; stating with a whisper that he had “FOMO” (fear of missing out) when the morphine tempted him to sleep. He was so endearing that the nurses would linger in his hospital room to hear his stories and cried with his children when it was time to leave.

Steve always found joy in the smallest things; like the flag waving on a hillside, the smell of fresh coffee, or picking up a loved one from the airport. Steve lived a spiritual life: he fed the homeless, built houses for the poor and was kind and generous to everyone he ever encountered from the local pharmacist to the little kids in the neighborhood. He had an old fashioned sense of ethics and chivalry: he believed in the truth, fairness and protecting those weaker than himself. He had a huge number of friends because he made new friends everywhere: on a walk in the harbor or a trip to Costco. His creativity was legendary: he created ditties to the beat of his car’s blinker; he initiated a whole plane load of strangers to sing Christmas carols on a flight home on Christmas Eve. His sincere smile welcomed all to his home and, if lucky, he provided a honky-tonk song before they left. Steve made friends wherever he went in life, and he never lost a single one along the way.

As a Dad, he taught us to “buck up” when life was tough, but held us tenderly when we just couldn’t. He taught us the virtues of being honest, humble, tender, funny, and how to tell a good joke. His secret was to keep telling it over and over again. Once they stop laughing tell it one more time and then laugh hardily at yourself. Though his voice was strained at the end, his laugh could be heard and felt by so many.

His last wish was to go out laughing. Though our hearts are broken and there is an awful hole left behind, we ask you all to laugh a little harder and a little more often at life. And when the laughing stops, laugh one more time for Steve.

In lieu of flowers, please donate to Lungevity.org for lung cancer research.