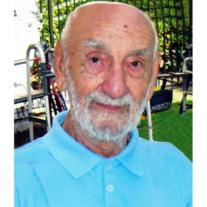 Steve passed away in Laguna Hills, CA on Saturday, August 11, 2012 at age 95 after a brief illness. He was born April 27, 1917 in Dixonville, PA, the second of ten children of Matej Golias and Veronica Eastman who came to this country from Slovakia. He grew up in the coal mining town of Commodore, PA where he attended Green Township High School, and graduated with a B.A. degree from Indiana University of Pennsylvania. He was an officer in the Marine Corps and served in the Pacific during World War II and again during the war in Korea. Upon leaving the military, he received his MBA degree in industrial psychology from Case Western Reserve University, and pursued a career in management training.

He is survived by his wife Kit, the love of his life, to whom he was married for 69 years; four sons, Louis, Richard, Daniel, and Christopher; two grandsons; and six great-grandchildren.

He will be greatly missed by all who knew and loved him.