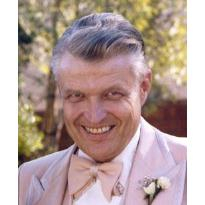 Thompson, Stanley passed away on August 4, 2009. He was born on April 12, 1924 in Chicago, Illinois. He served honorably in the Pacific Rim during World War II as a corporal in the Air Force. After the war, he returned to Chicago where he later married Alice, the girl next door, and they had two daughters. The family moved to California where he and Alice owned a restaurant and catering service in Orange. He became a Catholic in 1999 and was active thereafter in the RCIA program. He was also an accomplished public speaker, loved to write funny little poems, and enjoyed a lifelong love of golf. Stanley was ultimately a man of honor, a great husband, father, and friend. He delighted us all with his quiet sense of humor and will be greatly missed.

Funeral Mass will be held at 9 a.m. on Saturday, August 8, 2009, at St. Timothy Catholic Church in Laguna Niguel.