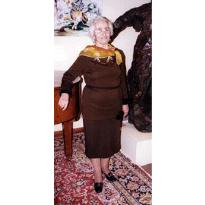 Srpouhi Sapsezian, nee Kamburian was born to Haroutyun and Zekia Kamburian on April 13th, 1914 in Turkey. She was the eldest of three children with Barkey being a year younger and Lily being the youngest. At the age of one, she, along wih her family was exiled to Syria where she grew up and received her education.

Throughout her school career, Srpouhi excelled at almost everything she undertook. She was a very active student; she played for varsity Volleyball and Basketball and was class president frequently during her school career. In addition, Srpouhi was very active in her church and often performed as soloist in the church choir.

She graduated from Aleppo College for Women with a teaching degree, after which she taught for six years. She was extremely loved as a teacher by all her students.

In 1938, Srpouhi met Garabed Sapsezian who was home in Syria from Addis Abeba, Ethiopia, and they were married on November 3rd, in the same year. Soon after the wedding, both moved to Ethiopia where they lived for ten years and during which time her two children Ohan and Zabel were born.

In 1947, after Ethiopia regained independence, Srpouhi and her family decided to leave Ethiopia for Syria but eventually settled in Lebanon. In the meantime their third child Annie was born.

In 1974, Srpouhi and Garabed immigrated to Michigan due to the unstable political climate in Lebanon. In 1983, they moved to California. Garabed passed away in 1991 and Srpouhi continued living in Lake Forest surrounded by her loved ones who she loved taking care of.

Srpouhi was an avid reader, gardener and loved needlework. One of Srpouhi’s greatest loves was studying the Bible; she prayed for her family and friends and the Motherland Armenia about whose orphaned children she was greatly concerned.

Srpouhi was deeply loved by many, and she is missed intensely by all.