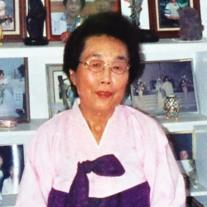 Soon Joon was born on January 29, 1929 according to the Korean lunar calendar in Gyeonggi province of South Korea. She graduated high school in Seoul, which was rare for women in Korea during that period. She became a Christian and later met her husband through church. They had five children.

In the fall of 1977 she gathered her family and immigrated to the United States and settled in Orange County. Soon Joon was a devout Christian and served as a deaconess (kwonsa) at her church for many years. Her strong faith and love of Christ was a constant strength for her throughout her life. She was known to stay up late and even copied the Bible by hand. One of her favorites passages of Scripture was, “I am the way the truth and the life.” – John 14.6

Her passing was very sudden and due to pancreatic cancer.
She is survived by 4 children, 8 grandchildren and 5 great grandchildren.