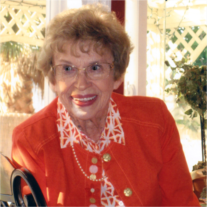 Shirley Ann Pfeifer 6/21/1927 to 6/17/2017 passed away peacefully in her sleep Saturday evening in Laguna Woods, CA. She moved there from Las Vegas 3 1/2 years ago so she could be closer to her kids in Southern California. It brought her great joy watching her great granddaughters grow over these last several years.

Prior to living in Vegas for 15 years she resided in Riverside where she lived for many years with her husband Jim Pfeifer.

Shirley was born in Danville, IL and had an older sister Margaret. She married Harry Miller in 1947 and had 3 sons, Lance, Randy and Ritchie (passed in 2008). Moved to California in 1961 and later married Jim Pfeifer in 1970 which added five more kids to the family, Mike, Patty, Danny (passed in 2008), Judy & Mary Ann.

A very gifted painter and artist as well as a nut for crossword puzzles.

She has 15 grandchildren and 16 great grandchildren, 1 nephew Kerry Brougher and 2 great nieces. She will be truly missed by all.