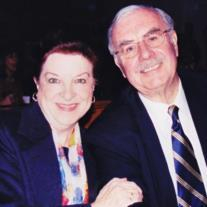 Kathleen ‘Sheila’ Mowbray, devoted wife, beloved mother, treasured grandmother was born in Manchester, England, as an only child. Her mother passed away when Sheila was just four. During the war, she was sent out of the city, with hundreds of thousands of other English children to keep them safe from the bombings. She met her husband, Gerard Mowbray (who passed away on November 5th) at a youth group at their church. They met at a St. Paddy’s day church dance so they celebrated that as the anniversary of the day they met. They married five years later. She had a special arrangement with God that she wished 4 children in the order of girl, boy, girl, boy. God granted that wish.

Sheila was a mover and a shaker. She persuaded her husband to immigrate to Montreal, Canada in 1957, to afford their young family a better opportunity. In 1966, she decided that the winters in Montreal were intolerable, so, now the Mowbrays, a family of six, moved to the San Fernando Valley. Sheila loved to be with her husband and was his temporary assistant and secretary for many years. They were inseparable and often waited anxiously for the other to return home. Sheila and Gerard later relocated to Orange County, bought a travel agency and spent many happy years organizing and escorting tours of Catholics to the Holy Land, Italy, the Continent and Ireland.

Sheila and Gerard were devout Catholics and enjoyed the community at St. John Neumann and Corpus Christi. They sang in the church choir for years.

She was very much the matriarch of the family and didn’t hesitate to state her opinion when she felt it was needed. She had a rapier wit, a great sense of fun and was sharp to the end. She was always beautifully dressed and never owned a pair of jeans.

When Gerard passed away suddenly 12 days prior to her death, she decided she wouldn’t live any longer on this earth without him. She soon joined her beloved husband of 63 years. They are now united in heaven. May they rest in peace.