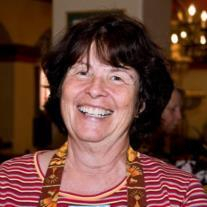 Sharon was called to heaven on April 29, 2015, as a result from the devastating effects of Alzheimer’s disease. Sharon was born on March 11, 1951 in San Diego, California to George and Lydia Mihalka. She was the fifth and last child, following Gene, Dennis, Patricia, and Louis. When she was five years old, the family moved to Long Beach where she grew up and graduated from Robert A. Millikan High School and California State University at Long Beach. After college, Sharon started her working career as an elementary school teacher and later as a proofreader at Thomas Bros. Maps where she retired after more than 25 years there. She married Mark Winters at Wayfarer’s Chapel in Rancho Palos Verdes on March 20, 1982. She was predeceased by her parents George and Lydia Mihalka, and her sister Patricia Mann. Sharon is survived by her loving husband, Mark, her brothers and their families, many nieces and nephews, friends, and her beagle, Summer.

In lieu of flowers, animals were her life and contributions to the Moonridge Zoo in Big Bear for the rehabilitation of animals in need or the Laguna Beach Mammal Rescue Center would be greatly appreciated. She will be laid to rest at the San Fernando Mission Cemetery in a private family ceremony. There will be a celebration of her life announced at a later date. The family wants to extend their sincerest appreciation to the all the staff and caregivers at Silverado Memory Care in San Juan Capistrano for the loving care they gave Sharon during the last five years where she lived.