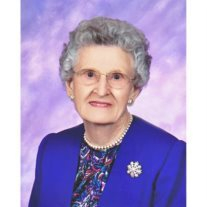 Selma Gaetz was born May 12, 1903 in a rural area in central Alberta, Canada, the 6th child of Samuel & Katherine Gaetz. The five older siblings were: Hannah, Ben, Albert, Lydia and Emma, and there were two younger ones: Edith and Bill. She grew up in a farming community and, like all children of that era, learned to do chores at an early age.

At 22 years of age she moved to Calgary, Alberta, the nearest major city. There she got her first job working for Templeton Cleaners. She soon found her talent in working with fabrics and began working for a casket maker, specializing in the beautiful and intricately fashioned silk linings.

After enduring 47 icy winters in Alberta, she struck out on her own for sunny California. Her initial destination was Lodi, where she had acquaintances. Not finding employment there, she traveled further south to Santa Monica. In that area she found work in a drapery shop and thus launched her business career. Within a couple of years she opened her own drapery business and spent the next twenty-plus years making elegant window treatments for homes and studios throughout Santa Monica, West Los Angeles, Westwood and Beverly Hills. And needless to say, her family members also enjoyed the finest custom-made drapery treatments in their homes.

But her life wasn’t all work. At the same time she was an active member of the Santa Monica Assembly of God Church on Arizona Avenue.

Within months of her move to Southern California, she bought her first car and learned to drive. She deliberately withheld details of this undertaking from the family members in Canada until it was all an accomplished fact. From then on she eagerly transported friends, family and visitors everywhere there was something to do or see. Not until nine years ago, on her 98th birthday, did she reluctantly relinquish her driving privilege.

In 1977 Selma moved to Leisure World (now known as Laguna Woods). There she became an enthusiastic participant in the Leisure World slip casting club; very soon joined the fledgling church that has become South Coast Christian Assembly, and acted as the magnet that brought other family members and friends to the area.

In May of 2004 Selma sold her Laguna Woods condo and moved to Freedom Village’s Independent Living. She transitioned to Assisted Living in 2010.

Her years at Freedom Village were happy and fulfilling and she deeply appreciated the friends and staff there. Selma and her family were so very grateful for the compassionate and devoted care of the staff, especially Susana Santos and Clarita Weber.

Her life was marked by a series of bold steps, taken in faith, nurtured by hard work, and with the benefits of achievement being freely shared with others. All this was done with charm, tact, selflessness and compassion. Selma Gaetz was loved by everyone who knew her, admired by all who came in contact with her, and was an inspiration and example to all of us. And she unhesitatingly gave credit for this long successful life to her Savior and Lord for His faithfulness and grace over the years.