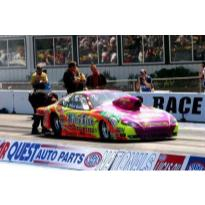 Geoffrion was hospitalized Sunday night for observation with breathing problems and a fever stemming from ulcers in his esophagus and was stricken the next day.

Geoffrion, who drove for Warren Johnson through 1991 before joining David Hutchens’ star-crossed Wayne County Speed Shop/Dodge Boys team with Darrell Alderman, reached the final round 28 times in a career that spanned more than 200 races from 1987 through 2004. He didn’t score his first victory until his 10th final round, in Memphis in 1993, where he defeated Pro Stock legend Bob Glidden. His most recent win was in 1997 in Topeka.

Geoffrion logged six top 10 finishes, including world championship runner-ups in 1992 and 1994; he scored a career-high six wins in 1994 yet finished second to Alderman. He finished third in 1993 and fourth in 1991.

Geoffrion sat out the 2001 season after being released from the Dodge camp following three lackluster seasons but resurfaced in a Ford with new team owner Hurley Blakeney and scored his final top 10 finish in 2003, a season in which he was runner-up twice.

‘scott will be remembered not only as a fierce competitor in the NHRA PowerAde Drag Racing Series, but as a friend to so many in the Pro Stock community,? said NHRA President Tom Compton. ?Everyone at NHRA is shocked by the news of his unexpected passing and our thoughts and prayers go out to Scott’s entire family.?

‘scott Geoffrion was one of those special people who didn’t have an enemy in the world,? said Warren Johnson. ?He worked for us in 1991, which was an enjoyable year for everyone on the team. He was a good racer and just a great person to have around.

?Even though we would go on to have our well-publicized staging battles, we never stopped being friends. We will miss seeing his smiling face at the track. He was a genuinely nice guy who was taken away from us much too soon.?

‘scott was a great racer in his own right and always a tremendous supporter of our racing program, but more importantly, he was a great friend, a loving father, beloved brother and a loving son with a huge heart. They say you only need five good friends throughout your life, like the fingers on one hand. Scott was definitely one of my five, so it’s like I’ve lost a finger. We’re certainly going to miss him.?

In lieu of flowers, the family suggests donations may be made in Scott Geoffrion’s memory to the Drag Racing Association of Women DRAW, 4 Hance Drive, Charleston, IL 61920. Online Website address: www.drawfasthelp.org.