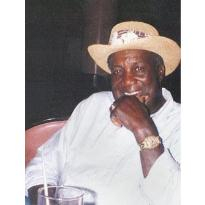 Samuel Hill, 83, of Scottsville, VA passed away on Saturday, August 22nd at 1:30 a.m. He passed of natural causes, in the home of his daughter Lisa Hill-Willis in Orange County, CA. A family celebration of his life will be held on Friday, September 4th, 1:00 p.m. at O’Connor Laguna Hills Chapel and Crematory, 25301 Alicia Pkwy, Laguna Hills, CA 92653. There will be a reception after the service at his daughter’s house, 8 Eric St., Ladera Ranch, CA 92694.

Samuel Hill, ‘Poomt’ as known to family and friends, was born on January 9, 1926 in Miller County, Arkansas to Eliza and Thomas Hill.

He attended West Track and Wynn Jr. High in Garland City, Arkansas with other family members.

Sam moved to Las Vegas. In January 1944 he was drafted into the US Army at the age of 17. He was stationed at Ft. Jackson in Pasco, South Carolina before serving with the 675th Ordinance Ammunition Company in France and England during World War II. For his service he received several medals including the Bronze Star. Sam reached the rank of Corporal before leaving the military in May 1946.

One day while working as a power plant manager in Anchorage, Alaska, Sam came across a real estate book where he saw a picture of a beautiful farm. Since seeing the farm he often thought of the idea of owning it. Sam loved farm life and wanted to retire to return to it. A year later he looked at the same real estate book and the farm he favored was still for sale; he purchased it in 1983 and retired in 1984. Sam enjoyed the simple pleasures farm life offered and dreamed of sharing this life with his children.

Besides farm life Sam enjoyed fishing, camping, playing cards, dominoes, watching poker matches, western movies, college basketball, nice cars, being around family and friends. He was a very hardworking man, often building his own homes. He was also a very caring and loving man, helping people in his community that were less fortunate than himself.

He was honest and a great man, father and friend. He is missed and will always be loved!