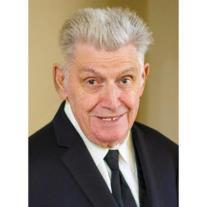 Salvatore “Sam” Thomas Brancaleone died peacefully at home in Coto de Caza, CA surrounded by his loving family on August 6, 2015. He was born and raised in Gloucester, MA on August 3, 1932 to the late Paul and Sophie (Lucido) Brancaleone. After graduating from Gloucester High School in 1950, he joined the Coast Guard where he was inspired to pursue a career in electrical engineering. He attended Franklin Institute, Boston where he obtained his degree. On April 11, 1959 he married the love of his life, Yvonne Marie Schmidt. Together they raised five children.

He co-founded Sabritec, Inc in Irvine, CA in 1980 where he worked until he retired in 2008. Although he loved his work designing and inventing (he holds several patents) as an electrical engineer, he was also a gifted artist. He enjoyed painting in oils, especially portraits of loved ones and scenes of his beloved hometown. Golfing was another passion for many years.

Visitation is at O’Connor Mortuary in Laguna Hills, CA Aug. 13 at 2-4pm. Funeral Mass will be held at San Francisco Solano Catholic Church in Rancho Santa Margarita, CA on Aug. 14 at 10:30am with viewing at 9:30am. A memorial mass will take place at a later date in Gloucester, MA.