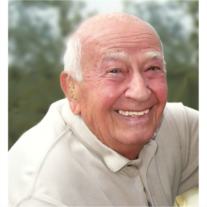 Sam Montevideo joined his wife, Grace in paradise on April 11, 2017.

Sam was born on Christmas Day in 1922, in San Giovanni di Gerace, Calabria, Italy. He was the oldest of four children born to Angelo and Maria Josephina Montevideo.

As was quite common in the early part of the 20th century, Sam’s father immigrated to the United States seeking a better life for his family. Sam immigrated in 1940 to join his father in Ohio, and three years later after WW II broke out, 20-year-old Sam joined the United States Army to fight for his new country. He served with the 752nd tank battalion in Italy as an interpreter for the tank battalion commander.

After the war, he returned to the United States where he met and married his wife of 55 years, Grace Giangardella. They made their home in Niles, Ohio and together they raised four sons. Sam supported his family as a millwright, in a career that spanned 45 years, working first at National Gypsum and then General Motors, Lordstown Division (Ohio).

Sam greatest enjoyment was spending time with his family and friends and sharing food and wine with them. He was an avid gardener, skilled handyman, and a good cook who made delicious sausage and other Italian specialties. Sam loved to play cards and played every week with his friends. For more than 50 years he was a 4th degree member of the Knights of Columbus, a Catholic Men’s fraternity.

Sam was preceded in death by his parents, Angelo & Maria Josephina and his brother Philip.

There will be a Memorial Mass celebrating Sam’s life at 11:00 AM on Monday, April 24th at St. Edward the Confessor Catholic Church in Dana Point, which will be followed by a ceremony at El Toro Memorial Cemetery and a reception at the residence of Richard and Candy Ann Montevideo.

In lieu of flowers, contribution may be made in his name to either the Wounded Warrior Project or St. Jude’s Children Research Hospital.

Arrangements are being handled by O’Connor Mortuary, 25301 Alicia Parkway, Laguna Hills, CA 92653. Friends and family may also send condolences and view his obituary at www.oconnormortuary.com.