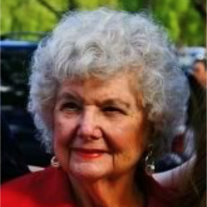 Sally A. Oleskiewicz joined her Heavenly Father at the age of 88 on June 1, 2016. She is survived by her son Ed; two daughters-in-law, Darlaine and Ellen; her four grandchildren, Jacque, Jessica, Danielle and Nic; and her three beautiful great-grandchildren. She is now reunited with her husband Edwin and son Stanley in heaven.

She was born in Chicago in 1927 and lived there until 1969 when she and her family moved to Lake Forest, CA to live the remainder of her life. As a devoted Catholic, she remained very active in her church, including starting a chapter of Catholic Daughters of Orange. She showed her commitment to her community by being President of the Lake Forest Association. Sally was also a founding member and the first president of the Lake Forest Garden Club. After the passing of her son she collected over 400 angels.

In lieu of flowers, donations may be made in Sally’s name to the American Cancer Society, www.cancer.org