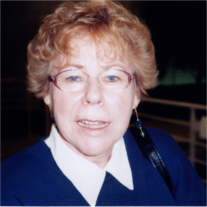 Ruth will be laid to rest on the same day at the El Toro Memorial Park located at 25751 Trabuco Rd., Lake Forest, CA at 11:30 AM with a brief gravesite ceremony.

Donations may be made in Ruth’s name to the American Heart Association, www.heart.org.

Ruth Herrmann was born to Waldine and Otto Ernst Grapentin on August 4, 1939 in Koenigsberg, Germany. Ruth had a brother, Alfred Eifel (1936-1939), and two sisters, Ingrid and Ilse. In December 1956, Ruth came to the USA with her mother and two sisters by plane, sponsored by her aunt and uncle Herta and Heinrich Neumann in Minneapolis, MN.

Ruth’s first job was at the First National Bank in Minneapolis, MN in 1957 and in 1958 they moved to Milwaukee, WI where she worked for M&I bank and met her husband, Helmut Herrmann, whom she married in September of 1960.

Ruth loved school and was in children and church choirs. Ruth’s main interests were her Christian faith, spending time with her family, and hosting others in her home.

Ruth moved to California with her children in 1980. Over the years, she worked for Ford Aerospace, Loral, Lockheed and Fluor Daniel. She retired in 2002 where she spent her remaining years in her condo in Rancho Santa Margarita and attended Grace Community Church in Lake Forest, CA.

Ruth was preceded in death by her parents, younger sister Ilse, and brother, Alfred.

Ruth is survived by her older sister Ingrid, her children and her grandchildren.