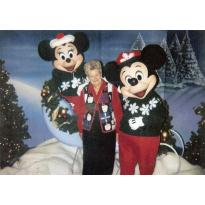 Ruth was born Ruth Ann Ackley on September 21, 1925 in Lake Geneva, Wisconsin. Her parents were Eugene and Selma Ackley Helgersen. She had one brother Richard. Ruth grew up in the Lake Geneva area and, according to Ruth; she loved school, got good grades and was very well behaved. She moved to California in 1944 at the age of 18 and spent the rest of her life here.

In the 1940’s and 1950’s Ruth focused on her family. In the 1960’s she worked as a manager at Bob’s Big Boy Restaurants. In the early 1970’s she went to work in the fabric business where she eventually owned two fabric stores and then later went on the road selling fabric to retail stores for various fabric manufacturers where she covered most of the western states. She also sold fabrics to Disneyland for the outfits used in various Disneyland parades and performances. Although she worked full-time until she was 81 years old, she always found time for family and was a great mother and wonderful grandma.

Ruth loved her family and friends and they were always an important part of her life. She was very loving, caring and always put her family first. She was a very positive person, never said anything bad about anyone, always helped others and rarely complained.

Ruth loved to bake she made ‘Killer’ Christmas cookies and she also loved to sew and designed and made most of her own clothes. She always believed in Jesus and during the last 15 years she regularly attended Saddleback Church where, most recently, she attended the Traditions venue. She always maintained her stance as a firm republican and only watched Fox News. She also loved the Angels.

Ruth will be greatly missed, but we take comfort knowing that she is now with her Lord and Savior Jesus Christ and all the family and friends that preceded her; and that the recent pain and suffering from various health issues is over forever.

Ruth was preceded by her husbands George Arthur and Charles Clapperton both in 1986, her daughter Marie 1992 and her son Richard 2007. She is survived by her son Alan and daughter Roseanne and a whole bunch of grandchildren.