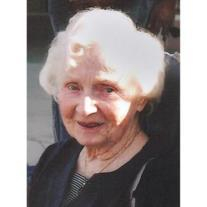 Ruth Thornton, a loving wife, mother, grandmother, and great-grandmother passed away on February 28, 2015 at the age of 91 in Tracy, CA after battling Alzheimer’s for nine years. She is remembered with the best of spirits despite the disease. She was the daughter of Virgil and Jewel Adams. She was preceded in death by her parents, her husband Charles H. Thornton, sister Naoma Adams Warden, and brother Lee Adams. Ruth is survived by sons Michael Thornton of Cypress, CA and Stephen Thornton of Lincoln, CA; daughters-in-law DiAnne Thornton and Kristi Thornton; grandsons, Brian Thornton, Keith Thornton, and Michael Thornton; granddaughters Kelsey Thornton and Amberly Pettigrew; great-grandsons Ryan Thornton and Colby Pettigrew; and great grand-daughter Gracie Pettigrew.

Ruth lived in Danville, Illinois from birth until 1963 when she moved to Anaheim, CA. The move to Anaheim was a huge sacrifice by Ruth and Chuck which was prompted by their strong desire to improve the education of their sons who were facing the prospects of many budget cuts in the Danville School District. Family always was a priority to her which was a consistent characteristic of her throughout her entire life until the day she passed away.

Ruth was employed by the Anaheim Union High School District as a Media Specialist for 17 years. Prior to moving to Anaheim, she was an employee of Palmer American National Bank in Danville, IL for 8 years. Her most important responsibility and the one she took the most pride in, was her job as a mom and grandma!

Ruth was an avid sports fan. She was a long time season ticket holder of the Angels Baseball Team while residing in Southern California. She also stayed close to her roots by being a passionate football and basketball fan of the University of Illinois Fighting Illini! Her biggest love of sports in the recent years were saved for the basketball teams her sons coached and all the teams that her grandkids played on. She was famous for being the first “fan” to arrive at almost every game her family members participated in!

Ruth also cherished her many visits to Disneyland where her husband Chuck was employed for over 20 years. It brought her much joy throughout the years to share the Disney experience with her sons and grandchildren. She particularly enjoyed a once in a life-time family trip to Disney World in Orlando, Florida.

Rest in Peace Ruth-you were the best mom, grandma, and great-grandma in the world. We are sure you are in heaven right now catching dad and everyone else up on how wonderful your kids and grandkids are and how much you love them!!!

Services will be held privately for the family. In lieu of flowers, the Thornton family has requested donations be sent to the Alzheimer’s Foundation of America. Donations may be made by calling the toll-free help line number, 866-232-8484. Thank you.