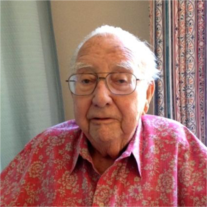 Russell Francis Fieberg, 92, passed away December 4, 2016, with his family at his bedside in Mission Viejo, CA, after battling pneumonia.

Russell was born March 5, 1924 in Oak Park, Illinois to Peter and Ella Fieberg and was a wonderful brother to his sister, Doris.

He attended Zion-Benton High School in Zion, Illinois. After high school he served overseas in the U.S. Army during World War II, landing in Normandy on D4. Soon after, his unit was involved in the Battle of the Bulge. He moved to California in 1950, and in 1951 was married to Barbara Jean Fieberg at the Little Church of the West in Las Vegas, Nevada. They settled in Garden Grove, CA and had 2 children. He later went on to establish his own business, Russtech Engineering Company in Irvine, CA, which is now led by his son, Donald.

Russell was a wonderful husband, father, and grandfather. He was a self-taught craftsman and during his life he was a master welder, an amateur photographer, a boat builder, and he designed and constructed numerous projects including a cherished family cabin. After starting his own successful engineering company, he obtained patents for many of the specialty tools he designed. Russell had an adventurous spirit and loved to travel and spend time on his boat in Dana Point harbor with family and friends. He will be greatly missed.

He is survived by his son, Don, daughter, Carol, and four grandchildren, Eric, Lauren, Claire, and Chelsea.

He is also survived by his sister Doris Chambers of Huntington Beach, CA.

Arrangements are with O’Connor Mortuary in Laguna Hills, CA