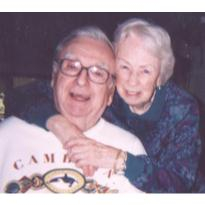 RoseMarie Legg , 81, passed away on Thursday, September 15, 2005 at her residence in Mission Viejo, California of Coronary Ischemia. Rosie, as she was known to her friends, was one of two siblings James was her older brother, and was born in Lomita, California at home with assistance of a nurse on November 3rd, 1923.

She attended Narbonne High School, was a GAA member, and played many sports. She was even active in bowling scoring a Top Triple 176 WBA U.S. one month in 1959. Her first job was as a teller at California Bank in Lomita, but she also worked for the U.S. Navy at Terminal Island. Rosie also entertained military personnel as part of the USO in San Pedro!

Rosie eventually wrote to, met and married Army Pilot Clinton C. Legg on March 9th, 1945 at the Lomita Presbyterian Church. Clint and Rosie had two children, Lawrence born in 1946, and Ricky born in 1948. Both were baptized at the church where their parents were married.

Although Rosie had never been north of San Francisco nor east of Tucson prior to marrying Clint, that all changed as Clint’s military career took them across America. Their young family lived in Austin, Texas and Denver Colorado in 1949; Riverside, California in 1950 ; Anchorage, Alaska in 1957; Omaha, Nebraska and Darmstadt, Germany in 1960; and San Antonio, Texas in 1968.

Rosie and Clint moved to Mission Viejo at the end of this journey, and they have been there ever since. Rosie’s hobbies were china painting, porcelain firing, and cooking. But more importantly, Rosie represented all that is right with humanity, exhibited an incredibly sweet disposition and modeled kindness to all who knew her.

She is survived by her husband Clint and her son Rick, two nieces Jeannie and Susie and a nephew Jim. Rosie was loved by many, and she will be dearly missed by all.