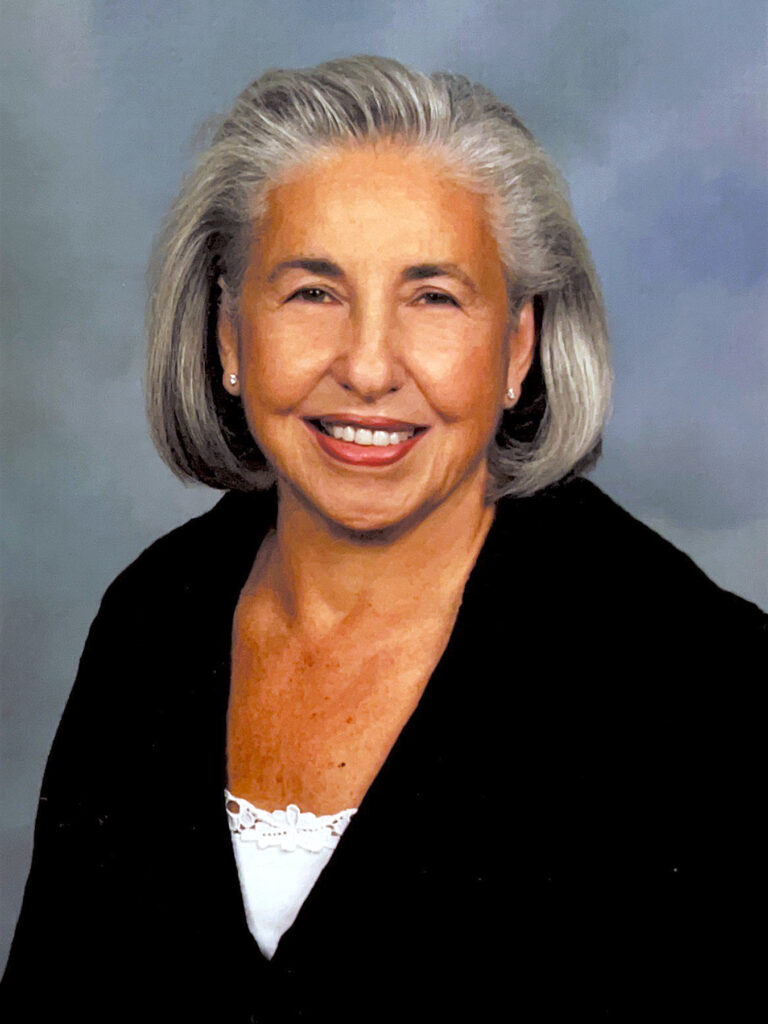 Rose Marie Busico, who lived in Laguna Niguel and Dana Point for 56 years, died peacefully at home on September 8. She was 87.

Though she loved California like a native, Rose was born and raised in Youngstown, Ohio. Her parents Dominic and Celestine immigrated there from Italy, and throughout her life Rose maintained the Italian traditions, cooked the regional dishes, and used a bit of the language that she grew up with. Holidays, especially, were joyously celebrated – cooking a feast of 12 fish dishes on Christmas Eve was the highlight of the year. The people she loved were truly the center of her life.

Rose came to California with her husband Louis in 1961. They originally settled in Anaheim (as Lou said, taking the freeway exit, “If it’s good enough for Walt, it’s good enough for me”). About five years later, they accompanied friends who were house hunting in the wilds of South Orange County. The Laguna Niguel development they visited was a tiny cluster of homes surrounded by rolling hills, rural two-lane roads, and serene, empty beaches. They were smitten and bought a house on the spot.

Even after more than five decades here, Rose never lost her astonishment over living amid such natural beauty and gentle climate. “How lucky are we?” she would often say But it wasn’t just luck. She and Lou moved here because it felt like the right place to raise their two daughters, Michalene and Juliana. And then, years later, it became the place where they became grandparents to Jacob Louis and Julia Rose, who truly lighted up her life. She was an amazing grandmother – encouraging them to be themselves, teaching them how to cook, instilling them with a sense of how special they are, and showing them how to lead a good life.

Rose began her work life in the meat department of Century Foods, a grocery store in Youngstown. It was where she eventually met Lou, who was then a meat cutter, and apart from the years when her daughters were young, she worked as a meat wrapper all of her life. The Alpha Beta on Crown Valley Parkway – or “my store,” as she always called it – was where you could find her working and making friends with everyone, from coworkers to customers, from when it opened in 1970 until she retired in 1993.

She found her spiritual home at St. Timothy’s. While she had been a member of the church since the early 1980s, she became much more active after Lou died in 2005. At first St. Tim’s and its bereavement ministries were pillars of support. But Rose soon transformed herself from a person receiving spiritual support into one of those providing it.

Rose had a generous and giving heart. She worked with Welcome INN and the Food Pantry, going on “bread runs” at local groceries, helping to prepare meals, and delivering food to those who need it. She was once was nearly arrested for giving food to the unhoused in a public park, until an officer recognized her from Alpha Beta.

She was a guiding member of St. Tim’s 50-Plus Singles group, and loved planning movie nights and outings, a member of the Free to Be women’s group, and a weekly parish office volunteer.

She was a Eucharistic Minister for the homebound – perhaps the most meaningful work for her – and deeply cared for those she visited. They were among her greatest concerns when she lost her driver’s license and could no longer make weekly visits.

Rose was also a bereavement counselor and funeral volunteer, another effort that inspired total devotion. She put this calling before any personal pursuits and would cancel plans whenever she was needed.

She had an open mind and was accepting and loving to all. She loved her family, adored spending time with friends, and enjoyed exploring new things, whether it was a new dish at a restaurant or a trip to place she had never been or a new flavor of ice cream (though her favorite remained Michalene’s homemade vanilla). She loved travel, particularly a trip to the Holy Land with Fr. Paw Lwin and her friends from St. Timothy’s.

She was always “up for it” — curious and open — and defied the conventional idea of a conservative grandma. She had a zest for life, and for independently living her life, and that could make the confines of age difficult.

One of her greatest joys was gathering people around her table. She loved good food and could read cookbooks for hours, looking for something interesting to prepare. For years, she cooked traditional Italian Sunday suppers for her family and friends. Her interest and emphasis on food inspired her daughters to become a pastry chef and a food editor.

She doted on her pets – and everyone else’s pets, particularly Franklin, her granddaughter’s cuddly pit-bull mix, who never left her side. She was selflessly available — no matter what — for her family and her friends and her church. Through the most difficult moments of her illness, she never complained and only worried about others.

She had the best smile.

After the Wednesday services, the family invites everyone attending to join them for lunch at Bistango, at 19100 Von Karman Ave, Irvine, CA 92612.

In lieu of flowers, we invite you to donate to Welcome INN, a ministry at St. Timothy Catholic Church that was close to Rose’s heart and provides food to those without housing.