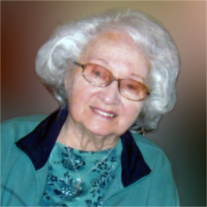 In lieu of flowers, Rose’s family requests that donations may be made in her honor to South Coast Youth Symphony Orchestra (SCYSO), www.scysomusic.org. Checks should be made payable to SCYSO and may be mailed to:

Rose Ellen Geiger
What an amazing woman!
A wonderful daughter, a loyal sister, a loving wife,
A special aunt, great aunt, great great aunt,
A substitute mom and grandma,
A welcoming neighbor and friend,
opening her home to anyone coming to visit our beautiful California!
That was my aunt!

Rose Geiger was born in Milwaukee, Wisconsin, on April 13, 1919 – just think of how many changes she had seen! Her Russian immigrant parents came to America through Canada into Minnesota and after farming for sometime, they settled in Wisconsin, where her dad, John Rupsoff eventually worked in the steel mills. Mary, her mother, in addition to raising 6 children, worked at times in an enamel factory and volunteered at the local Red Cross. They were a very loving family and though poor, never thought of themselves as such, but instead made many special memories together.

Rose began school in the first grade with some trepidation but soon fell in love with learning, something she continued for the rest of her life. She completed grade school and continued on to a technical trade school, where she completed a four-year program in housekeeping and secretarial skills.

She began the work force doing housework and being a mother’s helper but soon began to use her secretarial skills in a corner liquor store. From there she became a stenographer in companies such as Radio Specialty and Magaw Electric, quickly taking on new responsibilities.

At the same time, Rose and her sisters began writing to soldiers in the war. Eventually she met, fell in love with, and married Robert Geiger on October 12, 1946. Together they lived and worked in Wisconsin until winters became too harsh. Bob, now working at a cement company, would be looking for other work in the winter and unable to play golf year round – a sport he loved and even coached several others!

So off to sunny southern California they drove filled with hopes and dreams for the future. They both worked, he as a cement truck driver and she in the business of finance. They bought a home, welcomed all of us who wanted to see Hollywood and were involved in the lives of their neighbors and friends, always lending a helping hand.

Rose and Bob both loved to travel and hence, went on many cruises – three times to Mexico, once to Bermuda and finally to Alaska, where they enjoyed watching authentic Russian dancing in a Russian orthodox church in Sitka.

Ballroom dancing was also one of their passions. Whether dancing at the Eagles ballroom in Milwaukee, or with the Lawrence Welk band in Santa Monica, or on a cruise to Alaska, they both enjoyed this very much. They also enjoyed golf and bowling and joined several different leagues. Bob would often direct their vacations toward a spot with a great golf course. Eventually they joined the seniors and continued their love of travel as they went on many short bus trips, especially to Las Vegas.

In his later years, Bob’s health started to decline, and he spent the last five years of his life in a skilled nursing facility with Rose by his side, bringing him things he enjoyed when she came to see him – especially chocolate! Rose continued living in her home, surrounded by neighbors, friends and relatives. She was still active in her senior citizen club, went shopping weekly both to the grocery store and the thrift stores, went to the beauty salon, and to the puppy salon and out to eat with her friends.

Just two years ago she had a major stroke and began her recovery at Atria San Juan Assisted Living Facility. She felt like she was in a luxury hotel – no more cooking, no more cleaning, no more clothes washing! She loved it and enjoyed meeting all the new residents, learning all of their names very quickly. She worked hard getting back the use of her right side and was soon up and around with her walker, able to once again write her own name. Recently her health began to decline and she knew her time was near. She passed peacefully in her sleep on September 1, 2016.

I, Joyce, her niece, was able to spend time with her each week, going shopping or to the doctor, watching old movies, doing crossword puzzles, pouring through catalogs, and reading the Bible together. We laughed and cried together. She was filled with so many special stories of growing up in Wisconsin and later stories of her times in California. She was always considered our glamorous aunt, everything she wore always perfectly matched from her jewelry to her 4-inch high heel shoes. She always has the most elegant flocked Christmas tree sitting right in front of her picture window and she was the first of our relatives to move to Hollywood! (I’m sure we knew she was rubbing shoulders with all the movie stars.)

Though there are many special memories, the most important one was when she chose to let God lead her life and put herself into His hands. Two hears ago her long time friend Edette introduced her to Jesus as her Savior and she chose to accept His gift of being in heaven with Him. I will always be grateful for the time God gave me with her and for all the lessons she taught me. She always tried to look for the best in others and encouraged me to do the same. She was always there to lend a helping hand whether to offer to babysit to the family next door, to give odd jobs to a struggling student, to be a listening ear to someone who needed it, or just to be company for someone looking for a friend. Her home was always open and welcoming to everyone. She always “left the light on for me!”