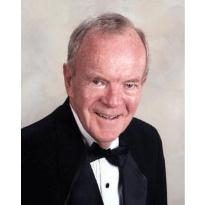 Ron was born on April 22, 1938 in Mt. Pleasant, Iowa, the fourth son of Claus and Andrea Kaiser Cordes. Ron met Annabelle Boubelik on a summer break and they were married in 1961. They had three children: James Henry, Robert Perry and Margaret Anne. Annabelle predeceased him in 1998.

Ron graduated from the University of Missouri in 1960 and immediately joined the United States Navy as a Naval Aviator flying the S-2 Tracker, eventually completing over 100 carrier landings on the USS Kearsarge. Following his honorable discharge in 1965, Ron joined United Air Lines as a pilot where he flew a wide variety of aircraft. He retired in 1998 as a Captain on the Boeing 747, and in retirement he found time to play golf, learn piano and travel widely. He began the new millennium by marrying Mary McGill Cordes.

Ron is survived by his loving wife Mary; his children Jim Becky, Bob Hannah, and Peg Wendy; nine grandchildren and one great-granddaughter. Ron was active in the AFS foreign exchange program throughout the 1970s and 1980s and is survived by Anders Bonde of Denmark, Peter Erckens Tine of Belgium, and Loraine Magda Simon of South Africa. Ron is also survived by his brother Dean Shirley and sister-in-law Marilyn.

Ron faced the challenges of ALS with courage, dignity and a sense of humor. He will be missed by everyone who had the great fortune to know him.

Services will be held on Saturday, April 10, at 11:00 a.m. at St. Andrew’s by the Sea United Methodist Church, San Clemente. In lieu of flowers, the family requests donations be made to The ALS Association, Orange County Chapter, 714 285-1088.