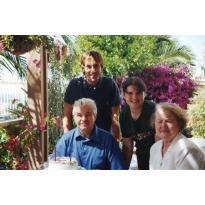 Roman ‘Romek’ Babula lived a life we only see in the movies or read about in books. Born on 7.28.35 in what was then Poland, his family was deported to Siberia by the Russians in 1940 where his infant brother and grandmother died of starvation. Roman’s father, Jan, joined the Polish Army just as the family was deported. Polish General Sikorski’s wise negotiations with Stalin helped free the Poles from Stalin’s oppression in Siberia. With the aid of the British, the families of the Polish soldiers were dispersed around the globe. This took the Babula family through Pahlevi, Persia where they lived for 1 year then India where they lived 5 years. After which they wound up in England and where Roman spent 10 years of his early adulthood. In 1956 Roman came to the U.S. via the SS Irpinia  with his parents and sister and settled in New Jersey. In 1962 he fell in love and married Zosia, his wife of 46 years. They had only 1 child, Elizabeth. He worked as a draftsman till he and Zosia retired to Southern CA in 2000 to be near their daughter, son-in-law, and grandchildren.

Romek will always be loved and remembered for his gentleness, kindness, and warm smile. He was always eager to lend a helping hand. He had a beautiful tenor voice and loved to sing and dance. He had a special ‘connection’ with small children. His grandchildren, Conrad and Jacqueline, have fond memories of all the special times with Dziadziu in NJ at Paramus Park Zoo, Wallington Park, playing soccer, skipping rocks, and ‘bajki’ about ‘kotki and pieski’.

We love you Dziadziu!  You will be dearly missed.

He leaves behind his beloved wife Zosia, daughter Elizabeth with her husband Andrew, and granchildren Conrad, and Jacqueline.