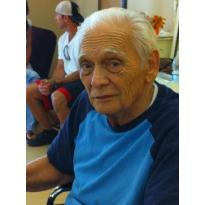 Roger Gallego was born in 1929 in Los Angeles to Roy and Mary Gallego. His love of playing the drums started at a young age when he used wooden spoons to pound on pots and pans. He played the drums up until the time that Alzheimer’s rendered him incapable. Equal to his love for drums was his love of Jazz. His family has fond memories of Jazz blaring on his stereo from sun up to sun down. Mom had to tell him to turn it down once in a while. : He also was quite the pool shark and loved to play whenever possible. Another passion was cars and an unquenchable desire to clean and wax them to a point where you could see your reflection in the paint.

In the early 50s he fought for our country in Korea. After the service he started an extremely successful career in sales. In fact, many gathered today have been instructed in his sales wisdom. Even after retirement he was always ‘doing a deal’ whether it was with a gardener, a painter, or a waiter. He found true joy trying to help others with their careers.

The greatest love of his life was his wife Cathie, with whom he had three wonderful, loving children, Paula, Christy, and R.J., and four grandchildren, Jason, Nick, Christian, and Kylie. Roger and Cathie married on May 4th, 1957. Cathie attributes both his soft lips and his moves on the dance floor as two of the qualities that swept her off her feet. Roger and Cathie were avid dancers, and they danced with so much love and enjoyment that everyone saw it. He loved Cathie so much that he mustered a smile in his final hours that will sustain her for the rest of her life. He also loved his children and swelled with pride every time he spoke of them.